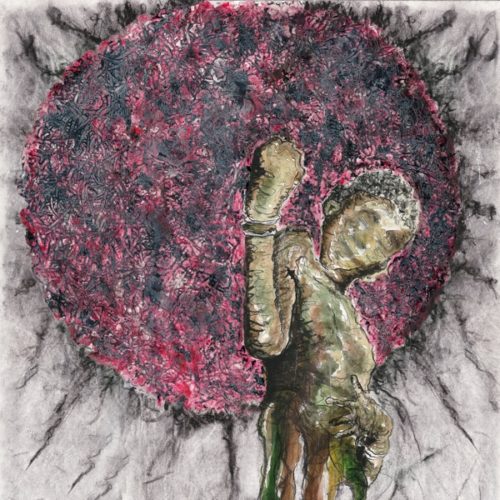 There has been a lot of talk lately on whether Priddy Ugly can rap or not. Well, he caught wind of that and had some reactions to it. But what’s more fitting as a reaction than a full album to address the citics.

Breaks the mold and shows that projects don't have to drop on Fridays. In fact, it's become riskier to drop on a Friday based on just how busy that day is. A mid-week drop finds the listener with some time to bump the work

SOIL is Priddy Ugly’s sophomore album, neatly packaged into 10 tracks. It feels weird that this is the official sophomore given that Priddy Ugly has a number of projects under his belt.

The album carries a sound  that has less of those grimmy 808s that we've become accustomed to from him. It's more of a Neosoul vibe as he spreads out his African consciousness on the tracks. He did work with Wichi1080 on production on some of the songs. It might be a more palatable outcome.

The intro is the title track, SOIL, which dropped a few weeks ahead of the album release with a creative video that caught the attention of many. He takes on the parallels between the developed world vs the developing SA. While SA is easy for Americans to mock on the surface, there is a lot of depth to its people and a closer connection to enlightenment. We all come from the soil and that’s where we’ll go once this chapter is done. The message is to not look down on any other being.

Art pieces on album art are definitely in season, local artists are getting a share of the action that comes with the active music scene. It’s symbolic of the work contained also being a work of art.

The African consciousness continues onto Let me Out. It's a powerful portrayal of the greatness and beauty of Africans. The delivery is poetic and artistic in its right. Dope verses from both Priddy Ugly and Zulu Meca. You can feel the emotions and energy from the verses. They give harsh criticism towards political leaders and try to break the stereotypes Africans have to deal with.

He's just kicking in on Woah Woah  which feels a lot like a freestyle session. He talks about the greatness of his woman and his appreciation for the women in his life. He tries to give a profound justification for using the word Bitch but whether that's convincing remains to be seen.

The tempo picks up in the second half of the album. It’s a more daring section that is less about love for all and more about claiming his place as one of the best doing it. The tracks in this section seem to be what had the masses going mad over the album. And that’s with good reason.

Priddy Ugly’s piercing confidence in his skill comes out in full form. Dead Jungle features Blxckie and H-D. They give a feeling of driving around in a dangerous part of the city late into the night. They let their gangsta sides come out as they deliver their 3 verses with good flows.

His feature selection is made up of young artists who were not here to play. Maglera Doe Boy is featured on the cypher-style Rap Relay. One of the best joints on the album. They do a relay of verses with no hook, Priddy Ugly drops a mean first verse which is followed by an insane account by MDB. They talk threads and how unmatched they are at skill - which they go on to show.

Handful of Dust is a cheeky joint where Priddy Uggly advances his challenge to get rappers rapping by exerting more pressure. On here Priddy Uggly uses fresh SA Hip Hop references to say he's really a different one. Yes, he throws a lot of shoes on the ground next to his peers to see who finna say the shoe fits. It's more of a challenge than a diss. His crosshairs seem to be locked in on A-Reece and Cassper. Does that mean they’re the ones he feels could step up the most? Or were they just targets he had in mind? It's not direct enough to warrant a response but it might light a spark and bring an exciting era in local Hip Hop. What's sure is that it has the people talking.

Even though he's serious throughout the project, he shows a playful side at the end on  Por Favor. It might be a dare to say look at what I just did, now you have to show what you got.

By his own account, he had to be meticulous with the project. Once it was done he had a number of people lend an ear in order to collaborate on bringing out the best work possible. And it's just the beginning, so he says.

Matched against E.G.Y.P.T, SOIL comes out superior and puts Priddy Ugly clear of the sophomore curse.

The album is wrapped up in just a little less than 30 minutes - what feels like a perfect runtime. SOIL focusses on rapping, bringing out Priddy Ugly’s lyricism. Somehow he found a sweet spot to show his rap skill without going over a lot of heads and making his hooks compliment it all. He had to reach into an elevated level of depth with his content while keeping the raps understandable. There is a lot of criticism of the current political structure and a call for a mass awakening. He delivered on raps, he delivered on his ability to make captivating music. And he says he's just getting started